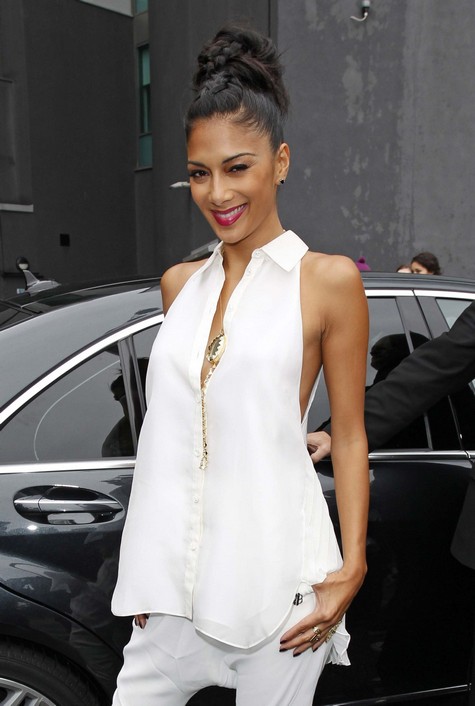 These new pictures of Nicole Scherzinger leaving the Radisson hotel in London are SCARY! Where did her curves go!? She's so skinny she looks like she has an eating disorder. She's literally skin and bones!

The forner Pussycat Dolls singer has always been known for her killer body and amazing curves, but by the looks of these new pictures, her curves are missing!

The current X Factor host was photographed heading to auditions, wearing what look like Hammer pants (and yes, I did chuckle imagining Nicole doing the Hammer dance).

She was only unveiled last month as the fourth judge on the series, but her over the top wardrobe is already causing headlines as she tries to carve a niche for herself alongside her fellow judges Tulisa Contostavlos, Gary Barlow and Louis Walsh.

She took to twitter to express her delight at landing the much wanted gig, writing: 'I'm so excited to join the UK X Factor family. It's where I got my start, so it feels great to come full circle. I can't wait to see what talent the UK has to offer and to help inspire and bring out the best in these artists.'

Gwyneth Paltrow opened up to Oprah yesterday on suffering from postnatal depression, something she didn’t experience after having her daughter, Apple, in 2004.

“It was very strange because I wasn’t expecting it at all…not that you would expect it,” she says. “After I had Apple, I would characterize it as postnatal euphoria. I was on cloud nine. I was in this bubble. Then, when I had him, I just didn’t feel okay. I didn’t feel right. He came out and I was like, ‘This is really strange. It’s not the same. What’s wrong with me?’ Then, I just went down kind of a slippery slope with it.”

Miss Jackson if you're nasty.

Lancôme is pleased to name Juliette Binoche as its newest brand ambassador.

First cast as the face of Lancôme’s Poême fragrance in 1995, Binoche embodies the essence of French femininity.

“It is an immense pleasure for us to welcome Juliette Binoche back to Lancôme. Her career choices, her natural and moving beauty, her independent spirit and generosity epitomize the values essential to our brand,” says Lancôme International President Odile Roujol.

Authenticity, sophistication and a luminous face make Binoche the perfect spokesperson for the Lancôme Rénergie franchise, a complete skincare line that addresses the signs of aging. She will be featured later this year in an advertising campaign created by photographer Nick Knight.

Binoche was the heroine of the film Chocolat, for which she won a European Film Award for Best Actress and was nominated for an Academy Award, a Golden Globe Award and a BAFTA. She won an Academy Award for her role in Minghella’s “The English Patient”. Passionate about the arts, Binoche is a devoted theater lover who has acted in plays by Tchekhov, Pirandello and Pinter, among others, and she is an enthusiastic painter.

This masterful actress handles her career with genuine fearlessness, sincerity and conviction. She balances the roles of wife, mother and actress with equal strength and commitment.

John Cho and Simon Pegg have boarded the Starship Enterprise.

Cho has been cast as Sulu, the Enterprise’s helmsman, while Pegg has signed on to play Scotty, the ship’s Scottish chief engineer, in J.J. Abrams’ “Star Trek” feature for Paramount.

The “Trek” casting deals appear to be closing at warp speed this week, with Eric Bana signing on Wednesday to play the movie’s villain, Nero.

Already on board are Zoe Saldana as Uhura and Anton Yelchin as a young Chekov, the Russian-born navigator, as well as Zachary Quinto as a young Spock. Leonard Nimoy, who originated the role of Spock, is on board as well. Chris Pine is in talks to play the young Kirk.

The movie is expected to shoot from November-March.

Plot details are begin kept under wraps, but it is understood that the movie chronicles the early days of the Enterprise crew. The lead roles remaining to be cast are Christopher Pike, the first captain of the Enterprise, and Kirk’s parents.

Montgomery “Scotty” Scott was the ship’s third-in-command and was known for his problem-solving abilities in plot-critical situations. The role was originated by the late James Doohan.

Lt. Hikaru Sulu, known for his love of fencing, always was seen on deck piloting the ship next to Chekov. George Takei played the character in the 1960s TV series and the 1980s movies.

Cho starred as Harold in the cult hit “Harold & Kumar Go to White Castle.” He is reprising the role for the sequel.

Pegg, starred in “Shaun of the Dead” and “Hot Fuzz.” He next toplines David Schwimmer’s comedy “Run, Fat Boy, Run.”

Navy blue polish is supposed to be the "in color" for fall...would you wear it?

MTV and Bunim-Murray Productions are reuniting the original cast of The Real World: Las Vegas in their former home at the Palms Casino Resort for Reunited: The Real World, the first-ever reunion series for the franchise. The show, which will start production this month, puts the seven cast members together five years after the Vegas season and documents their reunion. The show is set to debut later this spring.

This is HOT! I loved that season!! I think a reunion series will be so cool!!

Source - In Case You Didn't Know